About Us
North Florida Hauling

Our goal is to provide the highest level of transportation services as well as safe and timely deliveries. We strive for honesty and integrity with our customers and business partners. North Florida Hauling has fair and competitive pricing, while providing a safe work environment for employees and owner operators.

North Florida Hauling was founded in December 2007 by Jose “Pepe” Cancio. He was born in Havana, Cuba on December 30, 1939 and moved to the United States at the age of 20 after disagreeing with the Communists regime and Fidel Castro. Being a member of the Bay of Pigs 2506 Brigade, Cancio also volunteered in the U.S. Army during the Cuban Missile Crisis. Jose Pepe Cancio has worked in the concrete industry for over five decades. In 1970, Cancio moved to Brazil along with his family. From 1970 to 1983, Cancio began working as manager and grew to be general manager of Concretex S.A. in Sao Paulo, Brazil. Concretex S.A. is the largest concrete company in South America with more than $320 million in sales and 2,200 employees. In 1983, Cancio founded a construction material company in Arizona name Blue Circle Arizona. From 1983 to 1988, Cancio was founder and Executive Vice President of Blue Circle, with $170 million in sales, 850 employees, and became the second largest construction material company in Arizona. From 1989 to 2014, Cancio served as founder and CEO of Central Concrete Supermix in Miami-Dade County, which eventually became the largest Hispanic ready mix concrete company in Florida and one of the 65th largest concrete companies in the United States. Cancio served as Chairman of Florida Concrete and Products Association in 1995 and 1996, as Director of the National Ready Mixed Concrete Association from 2003 to 2006, 2007 to 2010, and 2011 to 2014. In 2003, the National Ready Mixed Concrete Association named Cancio, the Grassroots Activist of the Year. 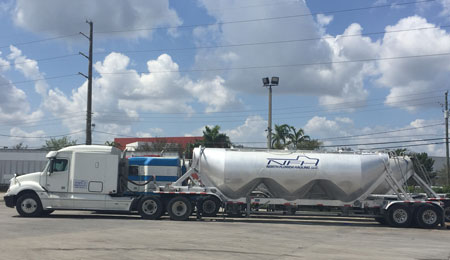 In 2007, as a proven C.E.O with many years of experience, Jose “Pepe” Cancio opened North Florida Hauling. His mission was to provide the highest level of transportation services as well as safe and timely deliveries. North Florida Hauling has a mission to maintain fairness and honesty while working with our customers and employees. Providing reasonable and competitive pricing alongside a safe workplace, we strive for the ultimate customer satisfaction. The company started with two owner operators and has successfully grown to a fleet of 52. North Florida Hauling’s dedication to provide the highest level of service continues to drive our success and growth on a daily basis.